Decentralization: Dilution of power and authority 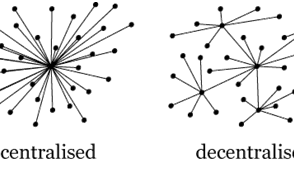 The fundamental idea behind the cryptocurrency revolution (almost synonymous to Bitcoin revolution) is the paranoia that banks and financial systems, the fabric of the modern economics and the quintessential intermediaries can make some grave mistakes again which can potentially cause a financial meltdown (like the one that happened in 2008 in the US) and cause a global economic crisis. Satoshi Nakamoto (the pseudonym of the bitcoin author(s)) had to propose a new type of decentralized digital currency called Bitcoin based on Blockchain mainly to mitigate this risk. The key idea is decentralization, that is to say, no single authority in the network controls the digital currency and by design, power is not concentrated. Its a self-organizing and self-preserving network of redundant records of digital transactions organized in the form of logical blocks which are chained together, hence the name Blockchain. While I am not sure about Bitcoin, but I can see the potential of the enabling network, the Blockchain and how it can be a game changer with a lot of real-world applications. While Bitcoin does not lend itself to a wide variety of applications other Blockchain networks like Ethereum are offering a wide range of applications. (In fact, the digital currency of Ethereum – ether is not even a first-class citizen of the network, Ethers are used as fuel to execute complex transactions in the network.)

If you look close decentralization is everything but new. For instance, let’s look at how the concept of expertise, knowledge, and their creation, dissemination, and consumption has evolved over the period of the last 20 years. There has been a tectonic shift in the fundamentals of knowledge, a true testament to that is Encyclopedia Vs Wikipedia. Knowledge was created by a closed group of ‘experts’  in the case of the encyclopedia as opposed to Knowledge being created by a self-organizing, well-meaning community from across the world. Knowledge is ‘pulled’ in Wikipedia as opposed to ‘pushed’. This is the premise of the book The power of pull. As you can see the power is not concentrated, there is a community of moderators working on their favorite topics and at the same time moderating content to keep the quality of facts. Thanks to the Internet which made it all possible, which is a distributed network. If you watch closely the trend is: distribution is always followed by decentralization. The Internet is brilliant but still, largely web is centralized, hence single point of failures and vulnerable to government censorships. Imagine if wiki-leaks was centralized and leaks are pushed as opposed to pulled it would have been shut down by one or more incumbent governments. IPFS (interplanetary file system) a content addressable storage based blockchain is gaining importance as we speak and is proposing a decentralized web. Currently, the pages served to your browser are coming from one or more centralized servers, how cool it will be if the pages of a site are served to your browser from a peer to peer network of web servers like BitTorrent except it will be backed up by a blockchain.

Do you see a trend? Bitcoin is a Blockchain for decentralized digital currency, Ethereum is Blockchain for decentralized compute, IPFS is a Blockchain for the decentralized web. Soon there are going to be multiple Blockchains, I can see self-organizing communities with their pet causes building their own Blockchain if an already existing Blockchain won’t work out or if they want to solve the current challenges with newer Blockchain implementations. Some may be successful and some may take time to catch on. Multiple Blockchains coming existence is already making people innovate on Blockchain interoperability with sidechains. Its counter-intuitive to completely eradicate the notion of authority but that is exactly what is needed, we need an anarchy with a conscience. Joi Ito and Jeff Howe of MIT media lab call it Emergence over Authority in their book Whiplash.

Decentralisation can offer the required pace and scale.

If knowledge has to be revolutionized with decentralization to empower the crowd if financial intermediaries are to be revolutionized with decentralization to empower the crowd, why not solving big societal problems like climate change be revolutionized? Climate change is one of the biggest challenges the world is facing right now and we have been doing something about it for about 3 decades now. Don’t get me wrong, but what is the rate of progress? If you connect the dots we are resorting to innovations like decentralization and crowdsourcing to solve smaller problems but we are still solving climate change with the anachronic ways muddled with layers of bureaucracy, bad socio-economic policies, and proceduralism. Governments, scientists, politicians, climate change councils meeting and talking once a year won’t give us the scale and pace we need. It’s time to create revolutionary new ways to stop and reverse climate change at scale and pace. Only decentralization and empowering the crowd can offer that. Decentralisation with government policies conducive to create a free-form ecosystem is the way to go forward. While some current Blockchain implementations have a negative impact on climate change, the fundamental concept of decentralization is still attractive. This post explains how to make mining in Blockchains ethical by using clean energy and also gives some dark pieces of evidence on how energy abusive are the contemporary mining techniques.

“The computer power needed to create a single digital token consumes at least as much electricity as the average American household burns through in two years, according to figures from Morgan Stanley and Alex de Vries, an economist who tracks energy use in the industry.”

How to inject decentralism into fighting climate change is something I am working on. So, Stay tuned. !

What are your thoughts?